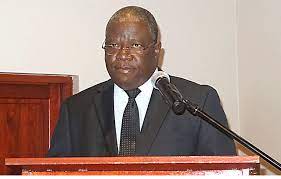 The two-day workshop was facilitated by LCC Capital Consultants. It was attended by managers responsible for human resources and training in banks and the building society.

In his opening address, the Governor underscored the importance of education in the development of a country. He noted the huge role played by tertiary institutions in this regard. He, however, observed that tertiary institutions are sometimes unable to address the demands of the job. He said this presents an opportunity for institutions like the CSC to be proactive in assessing the capacity building needs of financial institutions and then developing relevant and specific programmes.

“A needs driven training is the key to bring about change in the workplace,” said Mr. Sithole. “The centre needs to provide capacity building initiatives that will improve service delivery.”

The Governor commended the CSC for regularly reviewing its strategic plan in order to achieve a level of excellence in providing relevant training in the financial sector. “Someone once said, ‘vision without action is a dream. Action without vision is simply passing the time. Action with vision is making a positive difference.”

The CSC was established in 2007 as a vision of the CBS Deputy Governor, Ms. Sibongile Mdluli, when she won the Business Woman of the Year Awards – Corporate Category. The centre seeks to provide capacity building and improve skills for personnel in the banking and financial sector.

In her remarks, Ms. Mdluli, noted that the centre was faced with challenges of inadequate financial resources to promote the activities of the institution. She noted that this has resulted in minimal utilization of the centre as the marketing and awareness was inadequate. “In almost all the banks, there are no specific budgets earmarked for the training offered by the centre,” she observed.

The Centre has, however, been successful in running seminars on topical issues for stakeholders. In 2012 and 2013, the centre successfully organized post-budget seminars where the former minister of finance was a guest speaker.

Mr. Phil Mnisi, Chairperson of the Swaziland Bankers Association and Chief Executive of Standard Bank Swaziland, showered praises to the Deputy Governor for coming up and pursuing her vision of a training institute for the financial sector. He confirmed that the banks and building society are fully behind growth and sustainability of the CSC. “We pay our share every year because we want to see the centre thriving and benefitting our employees,” he said. He added that the contribution made by the banks was significant and demonstrates their level of commitment, not just involvement. “We desire to see the CSC meeting the specific needs of the banks, especially on the generic training courses.”

Mr. Phil concluded by noting that education was vital in transforming people to the best of their capabilities and potential.